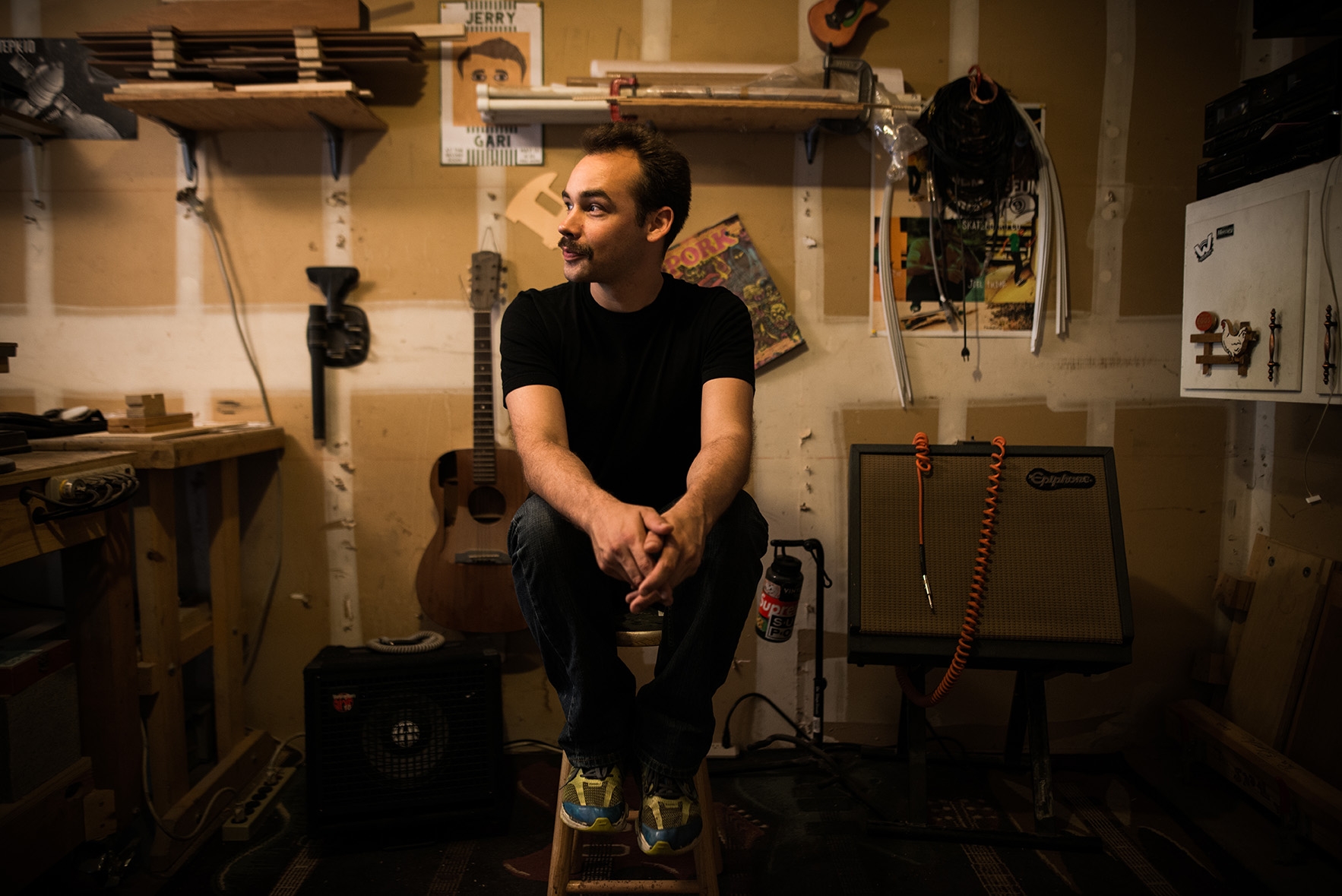 Here is a little about me.

I started feeling an interest in the guitar at around the time I realized that a listener can watch the speaker move when the record is spinning. I would say this is around 8 years old, around 1995. My parents had a stereo with Bose speakers and it had a tape player, record player and CD player all stacked up in this tower box. That thing ruled!

I started listening pretty regularly after that. As a birthday gift, I received my own tape player from my uncle. I had a toy electric guitar for a period; then I was given a classical guitar by my uncle. Played that for a year or so, then I was given the strat copy electric guitar. I played that for some time too. When I was about 14 my parents bought me my first acoustic/electric guitar. From that point on I’ve played guitar just about every day. Having been playing guitar since such a young age and playing so much, I’ve figured out a great many of the things that can go wrong with your acoustic or electric guitar and amp. My father was then and is now a very handy and mechanical kind of wiz. I grew up with unlimited access to tools of all kinds and space to use them in. If anything ever went wrong I would simply tell him and the issue would be resolved. I have learned so so many things this way. This worked well for years, we would do pickup swaps, strip guitar finishes and refinishing them the way I wanted them to be, cosmetic modifications, aftermarket parts; all of that mod stuff I got out of my system very early. I had a few guitars at that point and it seemed like the right thing to do at the time.

I remember getting my first job at a movie theater because I needed a bad ass Telecaster and a 2 X 12″ combo amp; I was 15. I lined that up for myself and started getting really into playing with other kids my age. It was then that I learned how much more I knew about guitars than a lot of my other friends. I was obsessed with them. I would read anything I could; magazines, catalogs and online. I got to a point where I would do guitar modifications and upgrades to my friends guitars and gear. I had access to the tools and I felt like I needed to learn how these things all worked. I eventually did something or needed help with something that I couldn’t understand and that my dad couldn’t help me with. It was at this time I met my first luthier. A person who does what I obsess over. I had just got my first car, found the nearest guitar store and would make the rounds with my buddies and band mates.

I aged to that point when your parents are not impressed with your guitar obsessions and feel the need to start pressing you to think about the future. I graduated high school and was going to a community collage working on gen eds. I did this for one year and had learned from a musician friend that there was one of the nations best schools of lutherie in Minnesota; where I lived. During summer ’06 I moved to Red Wing, Minnesota. I started working as an Rx Tech at the local pharmacy. Saving what money I could and buying tool’s for the luthier program I had just been accepted to. Things were certainly feeling good!

My first year of school was very fast paced. There was so much I did not know about the guitar and the history and the woods. So much! My first year was something else; I learning about all the different tools and having to make, by hand, so many of them. I would also learn how to properly care for and maintain said tools. The first semester was just tools classes and learning the Latin names of what seemed like all the worlds wood types. The second semester was the actual building of one acoustic and one electric guitar. I made a copy of the 1918 Martin #8 parlor guitar and a chambered mahogany body, P-90 equipped, Tele-sonic electric guitar with a birds eye maple neck. At that time Southeast Tech was offering a summer custom guitar finishing program. I elected to participate in this too.

My second year at Southeast Tech was with a focus on the arched family of instruments. It went very much like the first year in that there was a semester of learning about what you’ll spend a semester building. So there was the violins history; which is vast to say the least. There is also the not so vast, but equally interesting and modern, arched guitar history. I found this to be fascinating as I was signing up to make and arch top Benedetto acoustic guitar copy. This would prove to be one of the best seasons of my life. As a guitar player, music appreciator, and a human being. A lot of things really started to make sense and I had become very motivated to build my guitars.

I had been hanging out with two guys a lot during this time; Hans and Brandon. These two would push me to be more creative and driven than I had ever known I could be. We lived together, skated together, partied together and made guitars together; both at school and on our time at home. This is where Lil Trees was born. Over the next year I would begin drawing up electric guitar body designs. The first prototype was really a culmination of the three of our efforts. This guitar we called the Tall Friend. The very first Tall friend was made by me and Brandon and given away to a special band that now and especially, at that time, meant a great deal to me and my closest friends. This was late 2008.

Late October ’08; I take a job with a company called Trade up Music in Portland, Oregon. I flew out for a two week bench test and found myself in a busy Portland guitar shop surrounded by musicians and artists of all kinds. I didn’t let the relocation shake up my building routine. I start in on the second Tall Friend model. This time to include the changes and improvements I realized the guitar needed after having finished the prototype. The second Tall Friend was also given to a special band to me at the time. I would at this time completely immerse myself in guitar repair because of how I started to recognize how much I didn’t know about guitars again. I was seeing so many famous guitars. So many expensive guitars with all of their flaws. I remember realizing that even with the issues, these instruments were able to reach such high levels of appreciation; creating the legacy we know them for even to this day. This was amazing to me because; at this time I had already started building up my awareness and experiences working with such a vast array or unique and rare; to run of the mill and every day old guitars. In a few months time I became the lead luthier of this guitar store.

In early 2010, I was on a break from building guitars, I was out biking one day and was hit and knocked off the road by a motorist who drove away after she drove into me. This was a dark period. After the accident, I needed to have surgery and was kind of in bed for a time after that. The time I spent healing was not the greatest either. I started to realize how important it is to take advantage of ideas. I started to believe that if someone has an able body, an imagination and determination; there should be nothing that can stand in the way; aside from themselves and the occasional hater. This I came to believe as truth while not being able to walk or move around without discomfort. Needless to say, when I started walking with ease again, I was ready to take this guitar building bit a little more seriously. This was a pretty productive couple of years for me; I was asked to give biweekly woodworking demonstrations at a local lumber yard. I did this for about two years. This helped me to purchase so so many tools and lumber. I was introduced to a great many new artists who were not affiliated with the guitar store or even musicians, I met people who own lumber yards, do wood refinishing, wood turners, people who make wood wind reeds, other wood workers and people who feel wood working is the coolest form of art. You can meet a lot of very interesting people at the lumber yard; this was a good feeling. Later on in 2013, while still working at Trade Up Music; I had made seven guitars since 2009, had started winding my own pickups and had finally, with success, designed the Lil Trees electronic circuit. I started to feel like I needed to leave Trade Up Music and pursue my guitar building in a new way. I made my guitars and preformed guitar repair out of my own personal work space. During this time I would see myself produce 12 guitars. This new regular building schedule was probably the most challenging and personally educational thing I have ever experienced.

After two years of working out of my studio, I decided to stop doing repairs there and focus all my time there to Lil Trees Guitars. I started up a three day a week repair gig with again, Trade Up Music and have been working with a great team of people and provide the city with some top notch guitar repair. This brings us up to about now; 2016. This past year has been great. My instruments have reached a new level of maturity and consistency; I now have four electric models and am about to release a new bass guitar model this winter. As far as immediate plans; I want to keep working on the web site, winding pickups and building the brand.

I hope this was as fun to read as it has been to live.