The Four Elements of Instrument Set-Up
I hope to illustrate here the principles of functionality; for the player, to further your understanding of how your guitar should work. These principles can be applied to not only acoustic instruments, but also electric guitar bridges including the floating bridges and tremolo bridges.

1.) The plane of the fingerboard or playing surface.

When under string tension, with a straight edge ruler between the center most strings or placed on the apex of the fingerboard’s radius; look to see if the straight edge is touching only the first fret and very last fret or beginning and end sections on playing surface. It is a great idea to check the treble and bass sides of the board/frets too. Symmetry is key for a well playing instrument.

– If the neck and fingerboard were indeed flat when assembled, then the additional pounds of tension pulling on the neck would pull it into a back bow. The truss rod is designed to counteract this action on the neck. This adjustment is known as relief or action. Regardless the amount of relief one sets the neck with, at no point is it desirable to have your neck’s truss rod set with enough action/tension to cause an up bow (when the middle most frets are meeting the straight edge before simultaneous contact with the first and last frets takes place; while under string tension!). Though, it should be noted that any instrument with a truss rod should have the strength or ability to be able to force the neck into an up bow while under string tension and tuned to pitch. If this can happen, then you have a guitar that offers you full control over the neck and its action/relief. 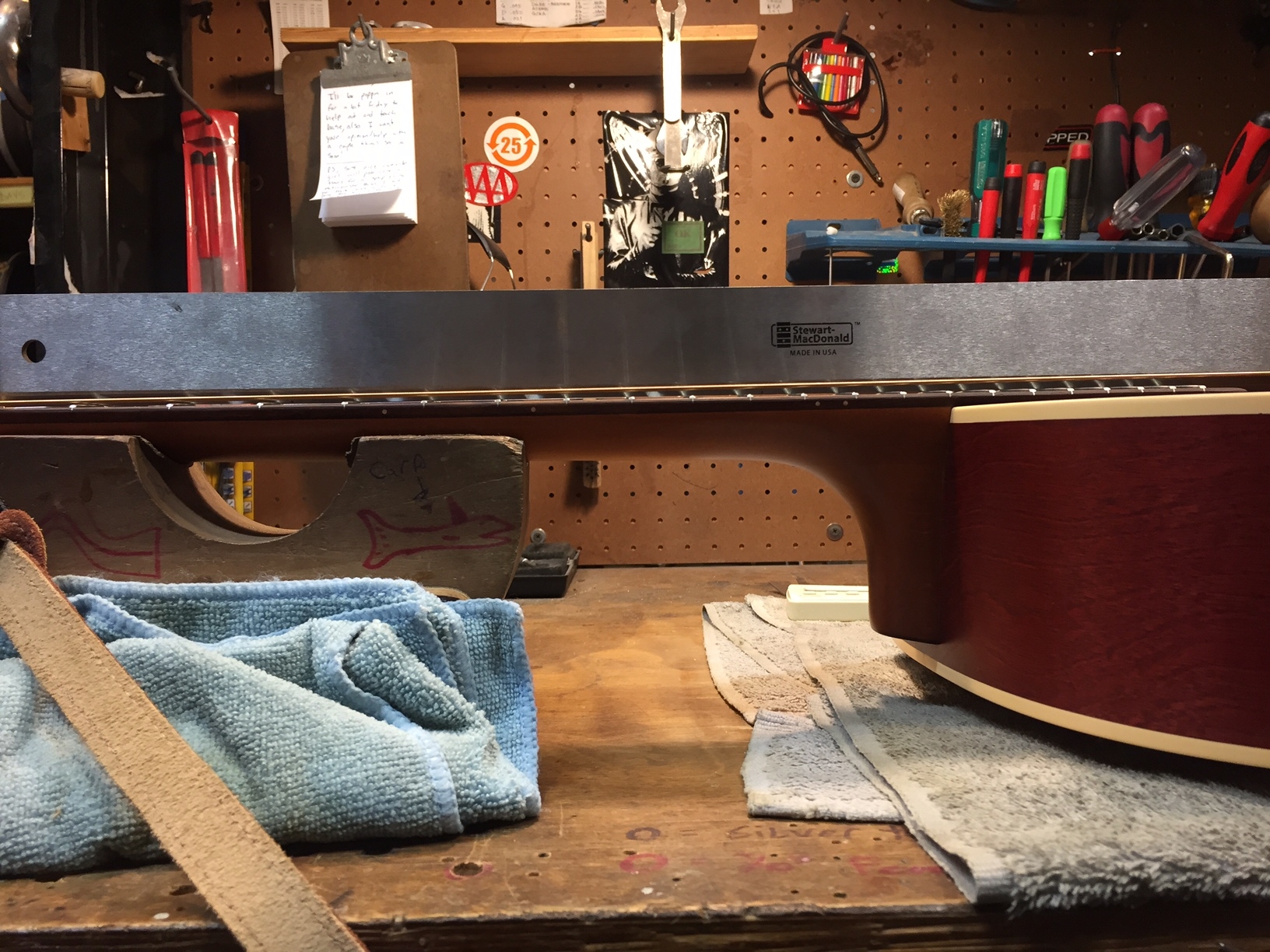 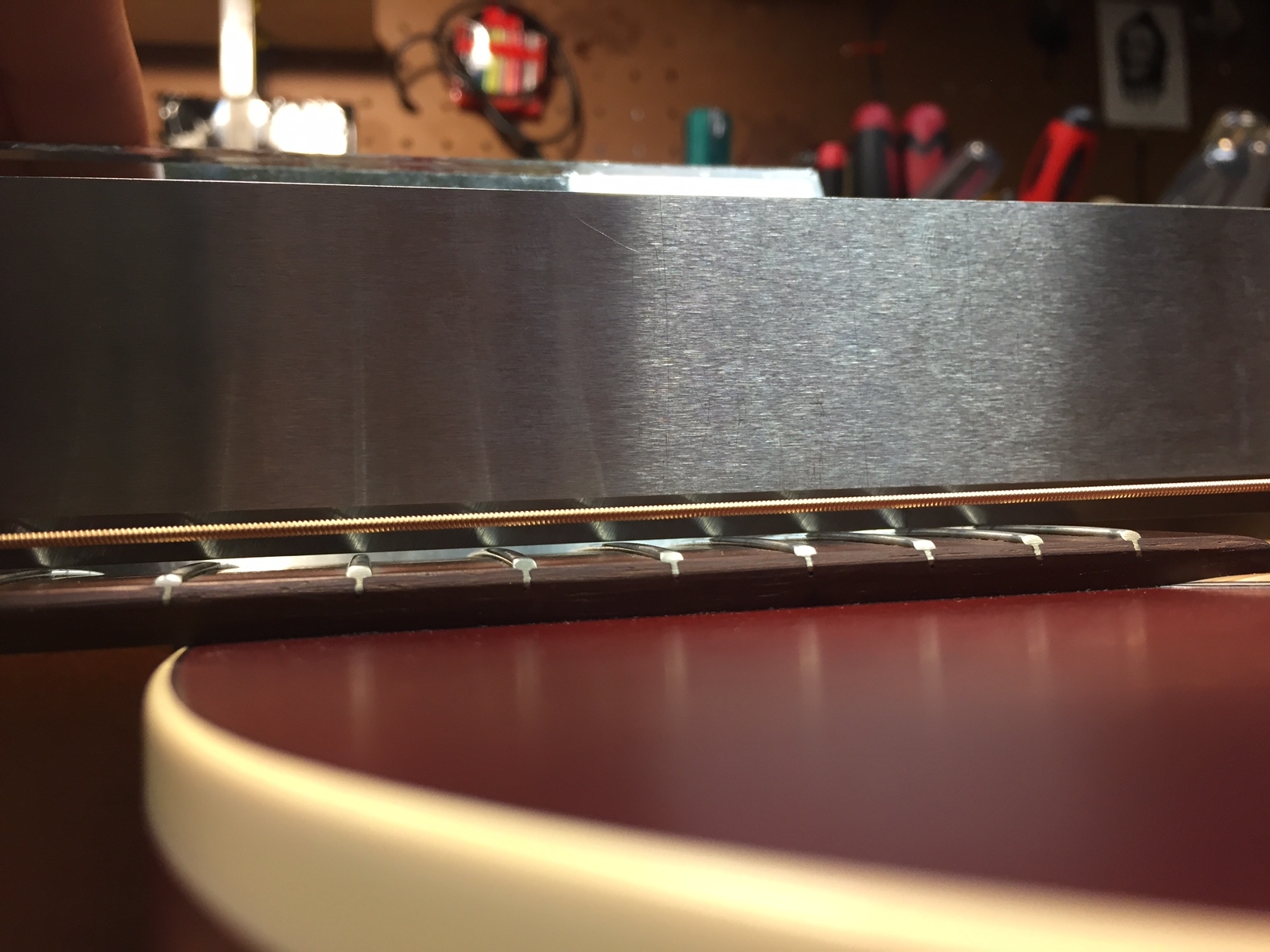 Notice how the straightedge has no contact with any frets other than the first and last. Especially over the neck to body joint. You will want to check for rocking with the straight edge and look for a hump in the fingerboard where the neck and body join.

*A hump can be identified if you can press on either end of the straight edge and whiteness your distribution of pressure shifting from end to end. You should not be able to, but if you are, you should be able to adjust it out with the rod. If you cannot, you do not have control of this neck at all; there is a problem.

2.)  The fingerboard plane and necks interaction with the bridge 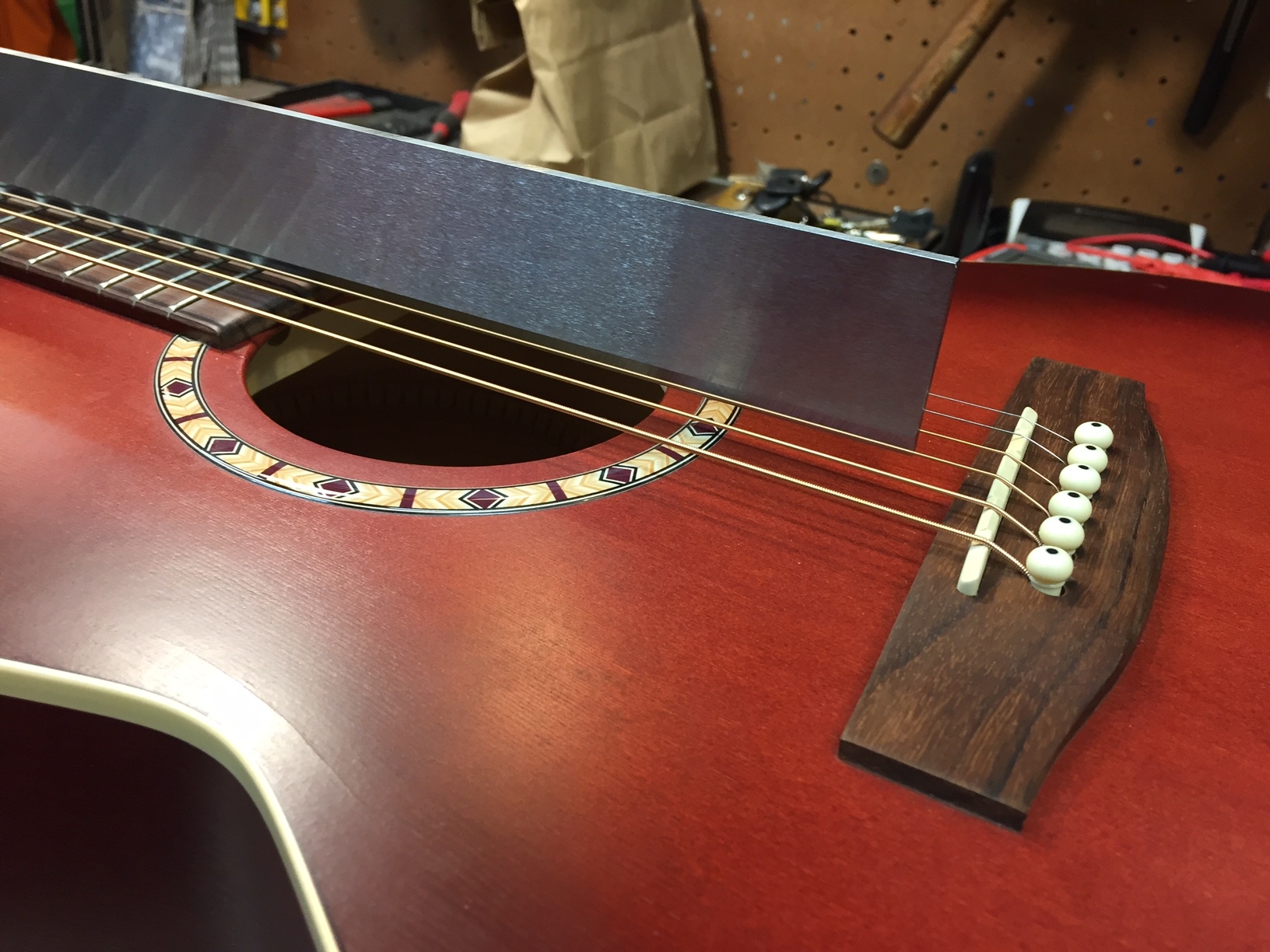 Examples of acoustic bridges and how they are installed; what to look for and red flags

-On an acoustic guitar or any instrument that has a saddle(s) in a fixed location that cannot be adjusted with a screw or set screw to be closer to or further from the nut of the instrument. With these types of bridges, it is ideal for the straight edge to kiss the very top of the bridge or to float just barely above the bridges topmost surface.

*it is a red flag if the straight edge butts up against the front most section of the bridge. The reason this is bad is because the strings are not physically held up by the bridge. The strings are held above the bridges top and the playing surface by way of a piece called a saddle. Imagine now if the straight edge were one of the strings on the instrument; the player would never want the string to just be resting on the top of the playing surface. There would not be room enough for the string to be agitated and to carry out its wave form shape across the entire length of string between nut/fret and saddle, without the string first running into a form of interruption because of the string being too close to the playing surface.
The neck and fingerboard point to the top of the bridge because it’s a really easy way for the maker of the guitar to know that the guitar can be made to have high string height, low string height and a standard, middle of the road type of string height. 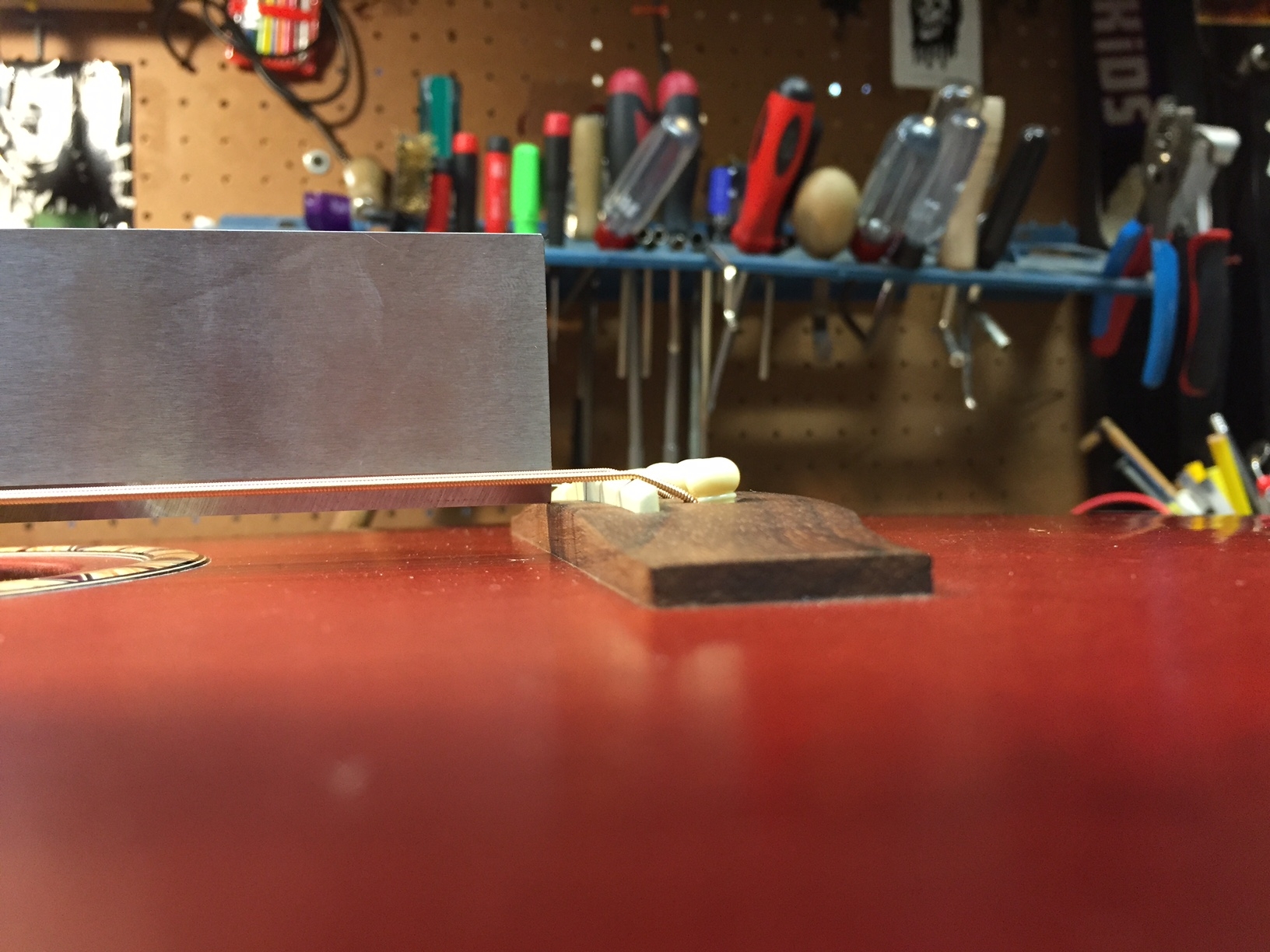 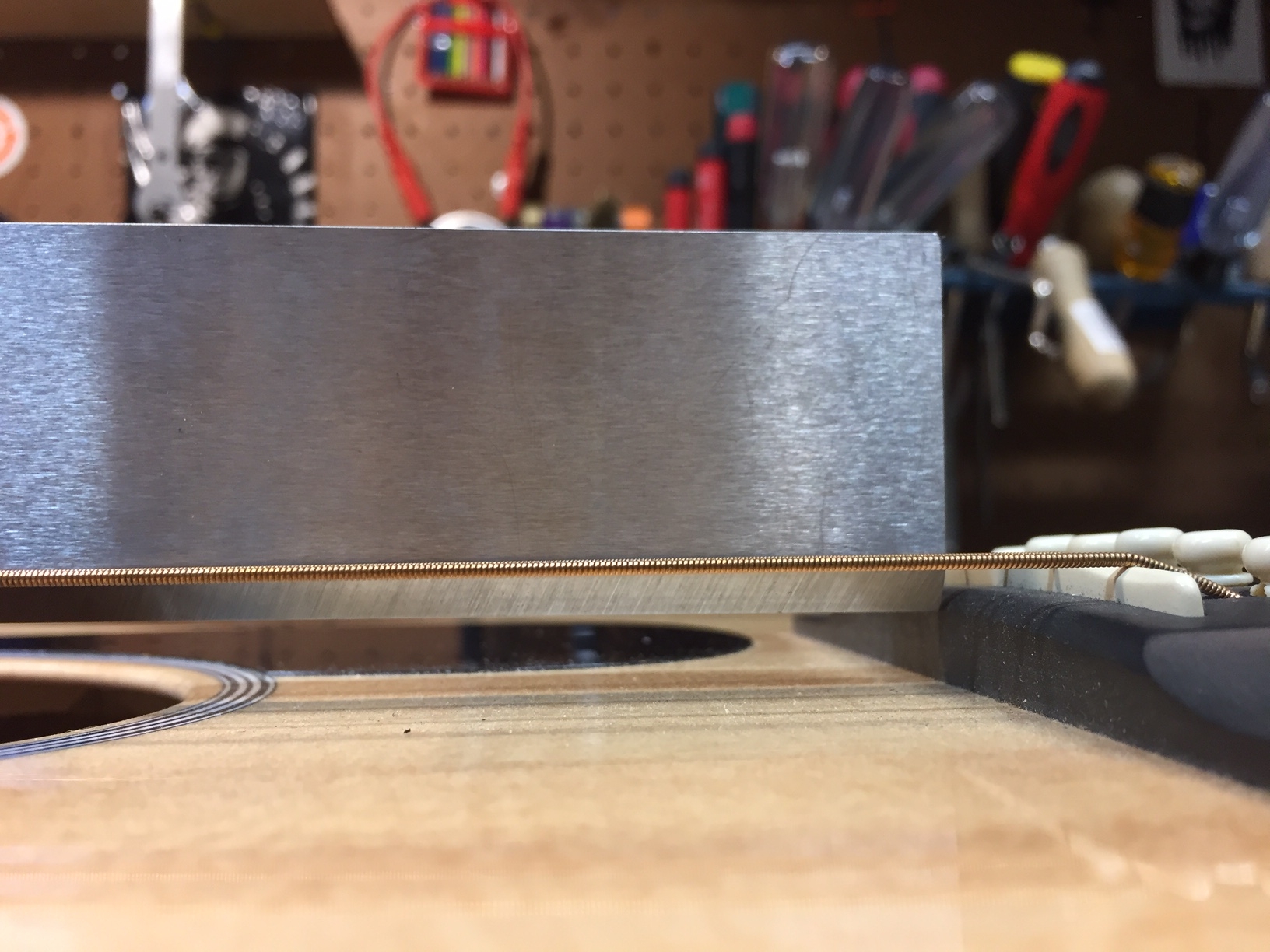 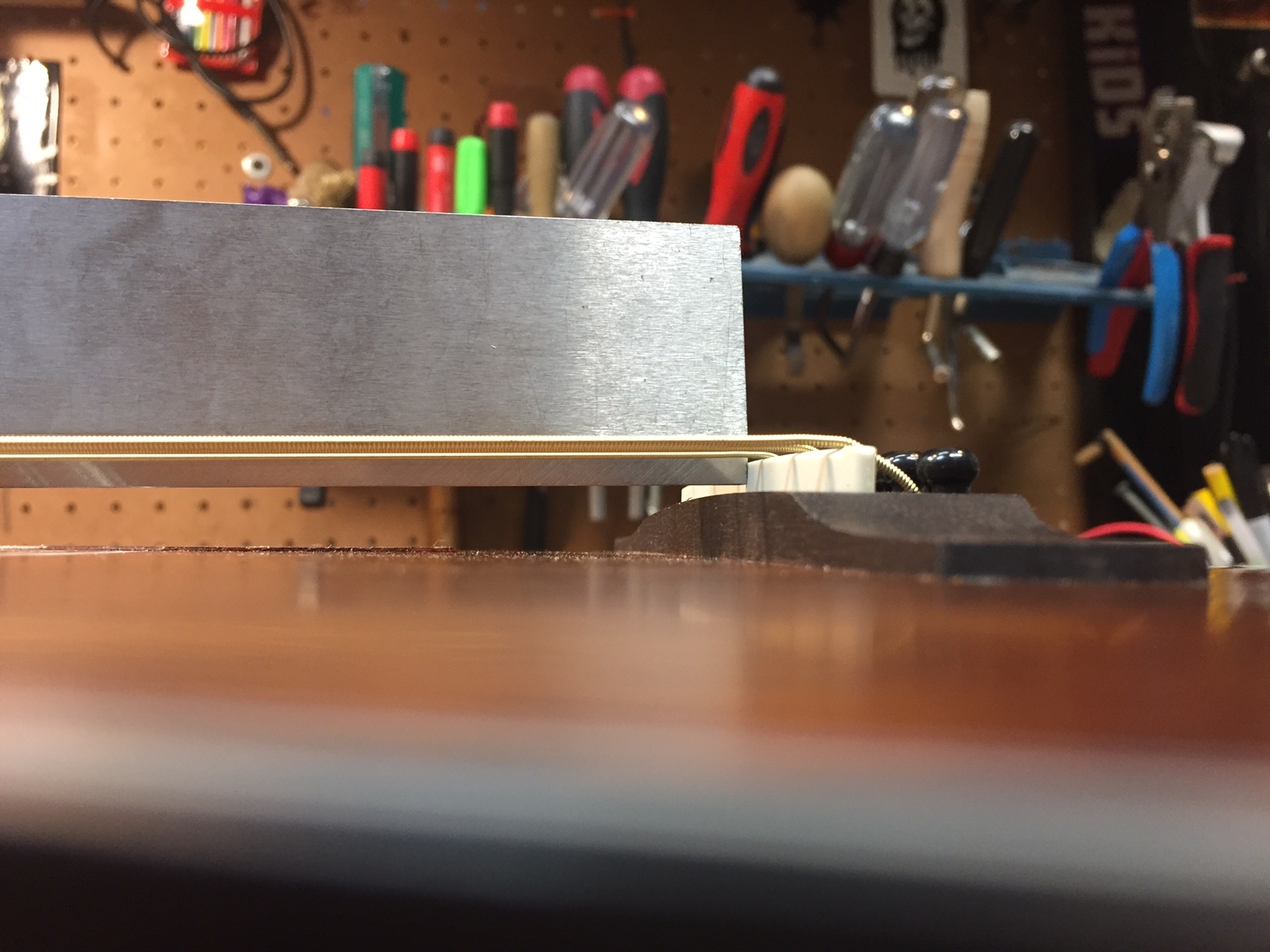 3.) String slots in the nut

Problems that can be caused by an improperly cut nut are numerous. To list a few: clicking and jumping on strings while using the tuning keys, strange sympathetic vibrations caused by the string laying in too wide of a slot, sting resting on the top of the slot and not settling in the slot because of the slot being too narrow to accommodate the gauge of string being used. Most notably, the slot’s bottom most surface is not flat, and the string (as a vibrating wave) can vibrate beyond the front surface of the nut. This is bad because the nuts main functions are to hold the strings an equal distance from the edges of the fingerboard while keeping the other strings evenly spaced from one another; and, arguably the most important function of the nut is to meet the strings wave at its front most surface, then send the wave form back down the line in the opposite direction towards the saddle. This last function can be the worst symptom of a bad nut because it will make your instrument sound very wobbly and out of tune. The strings will tune fine when played open, but when you try to play a chord or hold triads and move up the neck, you will hear that what was in tune a few frets ago has been steadily wandering out of tune. This happens when the string slot in the nut is improperly cut and the string’s wave is not effectively returned to the saddle, but instead, the string can extend its wave form beyond the nuts front surface and into the slot; thereby lengthening the overall playable string. This is bad because the frets are installed into the fingerboard in specific places that have been selected for a certain scale length. To be played in tune, all strings must begin in the same place(nut) and have a shared halfway point (12th fret). When the guitar has this type of symmetry, it allows the builder to compensate for the varying gauges of strings being used in one place: at the saddle. This is done so that the strings all play in tune with one another when played open or on the frets. When one strings wave travels longer than the other strings into the nut, and is then fretted, said string will register sharp because of the elongated vibration wavelength happening between nut and twelfth fret. Worst of all, if improperly diagnosed, the saddle for that string will be unnecessarily adjusted to capture intonation. These efforts will prove to be fruitless because the string is simply starting too far back and not in the right place; adjusting for that at the other end will only make it worse. This instrument will need a new nut to be made. 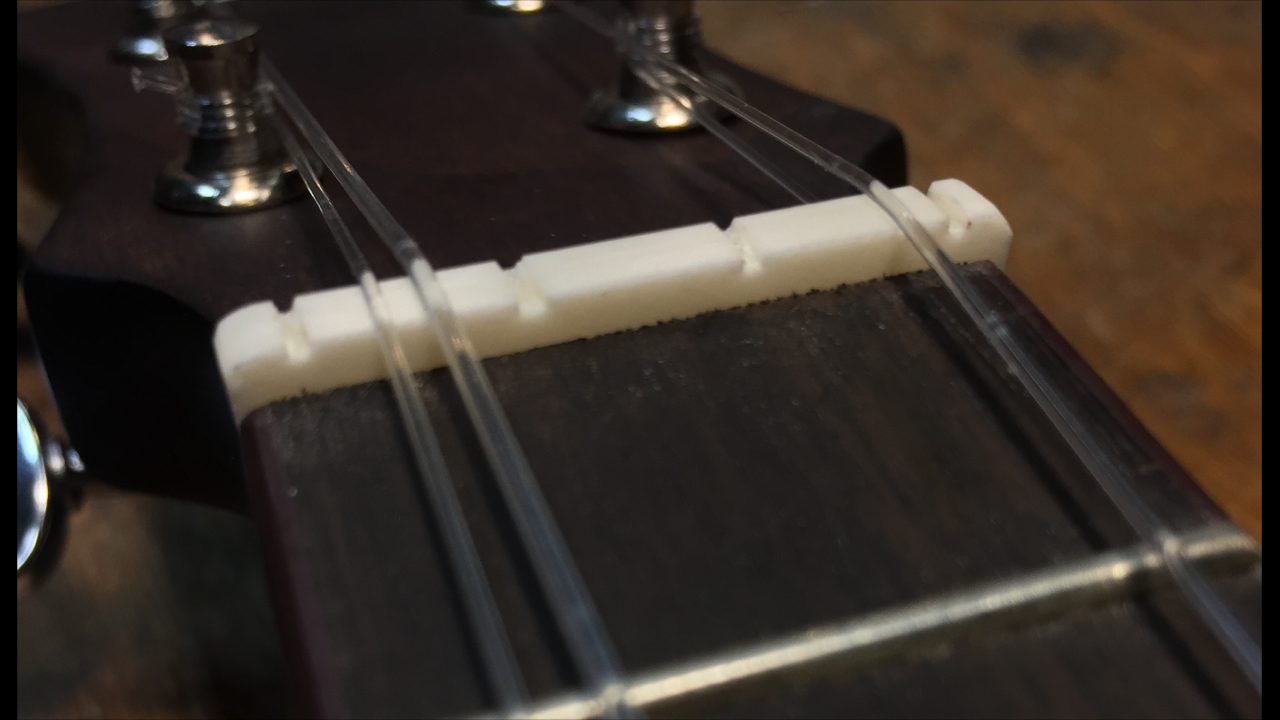 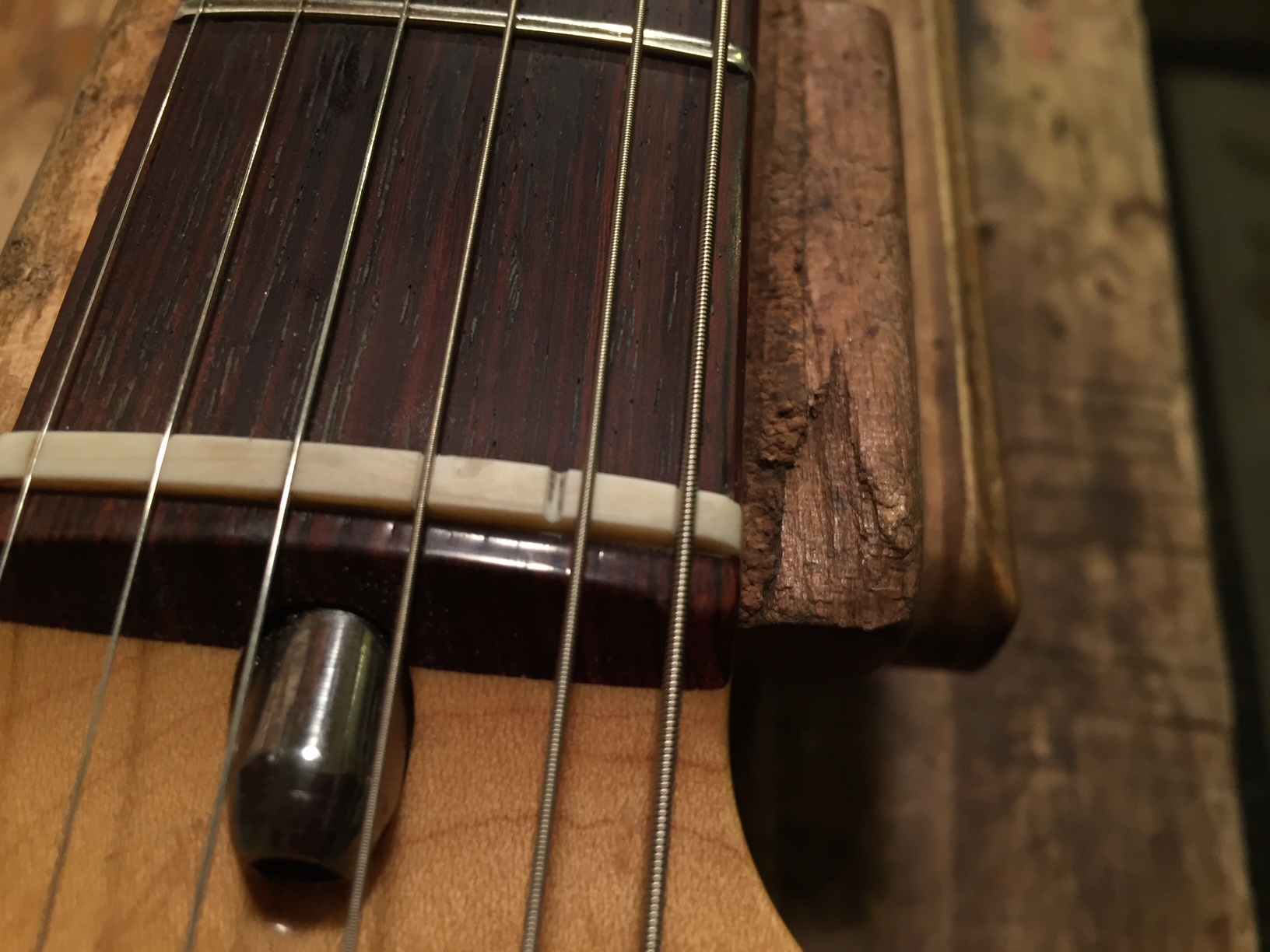 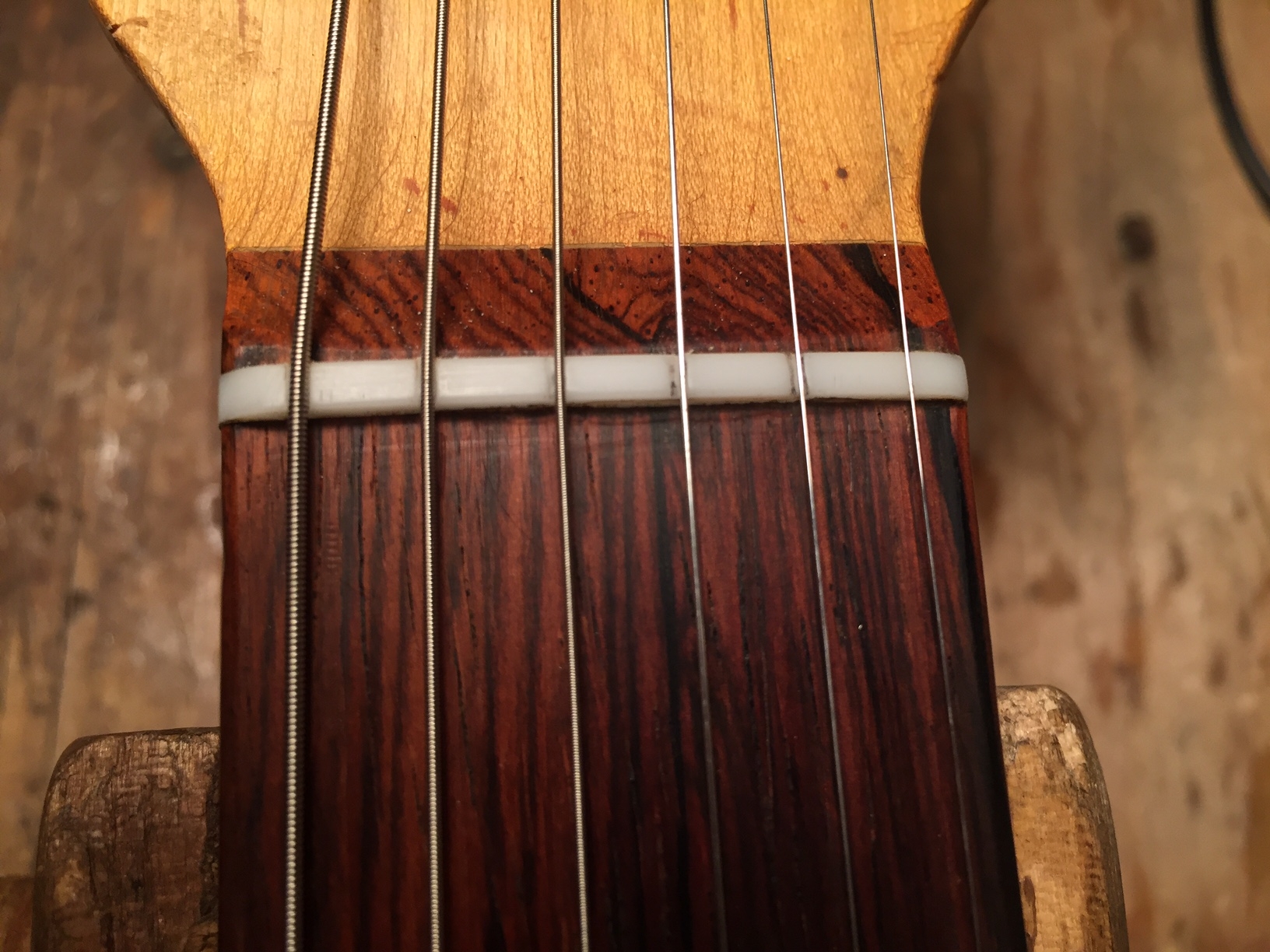 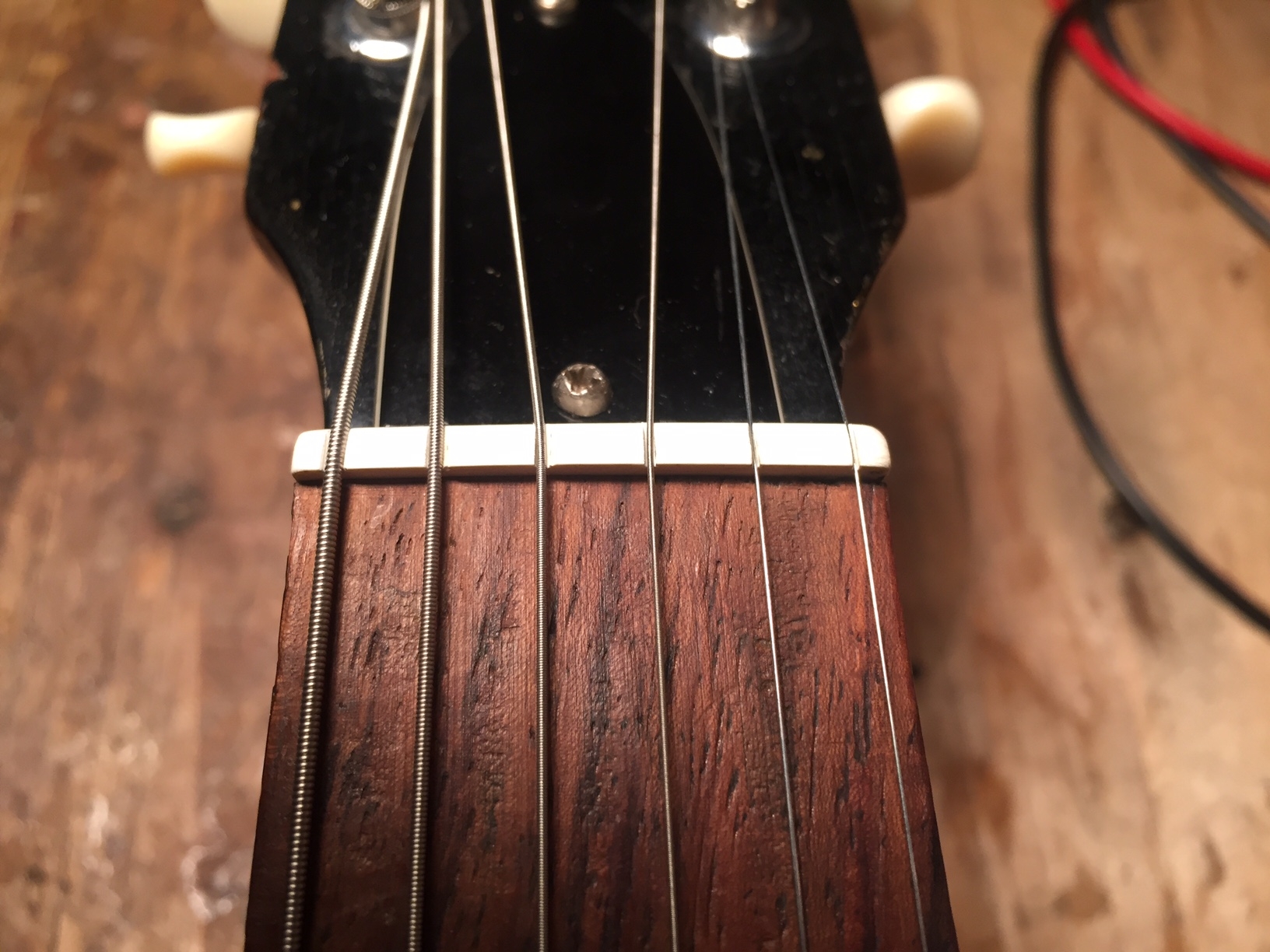 This is a quintessential step in the four-step process.

How intonation is measured and what to look for.
First we will have to stop viewing the strings as notes or any other type of thing that is difficult to comprehend. Let us look at the strings as nothing more than simple wave forms. If a wave has a start and end point, then it can be assumed that there is a halfway point. This is true, that point is the twelfth fret. Because all the strings share the same starting point (the nut) and they each share the same halfway point (12th fret); than where they end should be the only place where the builder can compensate for the increase in mass from smallest string to largest string. There is another rule to be aware of, string construction. Some strings are plain, and some are wound. Wound strings have multiple strings that make it up. When looking at string saddles, you will notice how the smallest of the plain strings will be closer to the halfway point than the largest of the plain strings. This will stand to be true for wound strings too and now we can gather, as the strings increase in size, they require more room for their wave form to carry out if it is going to intonate at the twelfth fret. This tapering back will start over when the string variety changes. E.g., look at an acoustic guitars saddle. The G string (smallest wound) intonates on the saddle, in the same place as the smallest plain string does. Now you know why the saddle on acoustic steel string guitars is installed cockeyed; to compensate for the strings increasing in mass and how they switch from plain to wound as they are tuned lower. 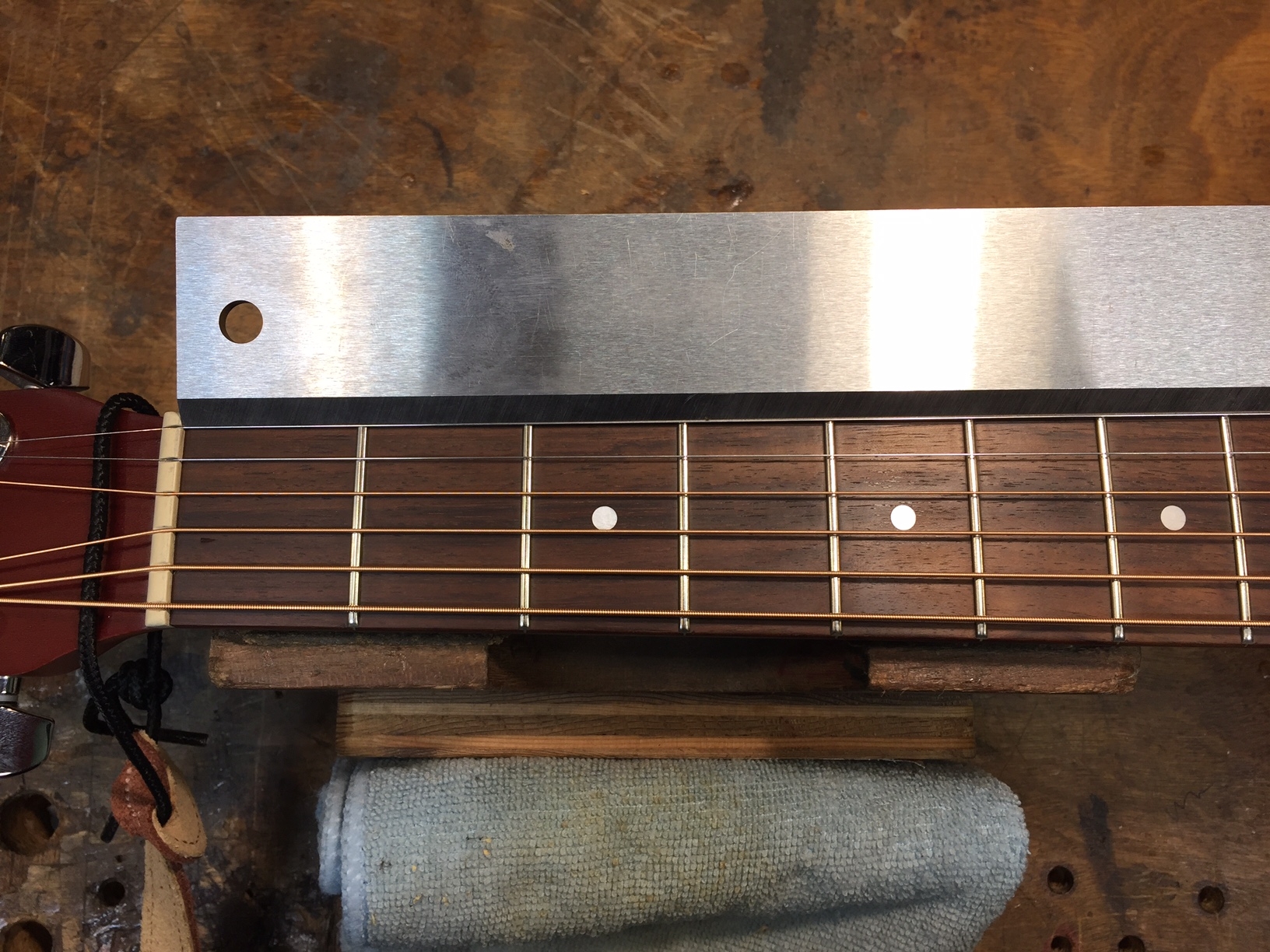 In this photo you see that I have now penciled in a dash showing on the ruler, where the twelfth fret falls relative to the instruments nut. 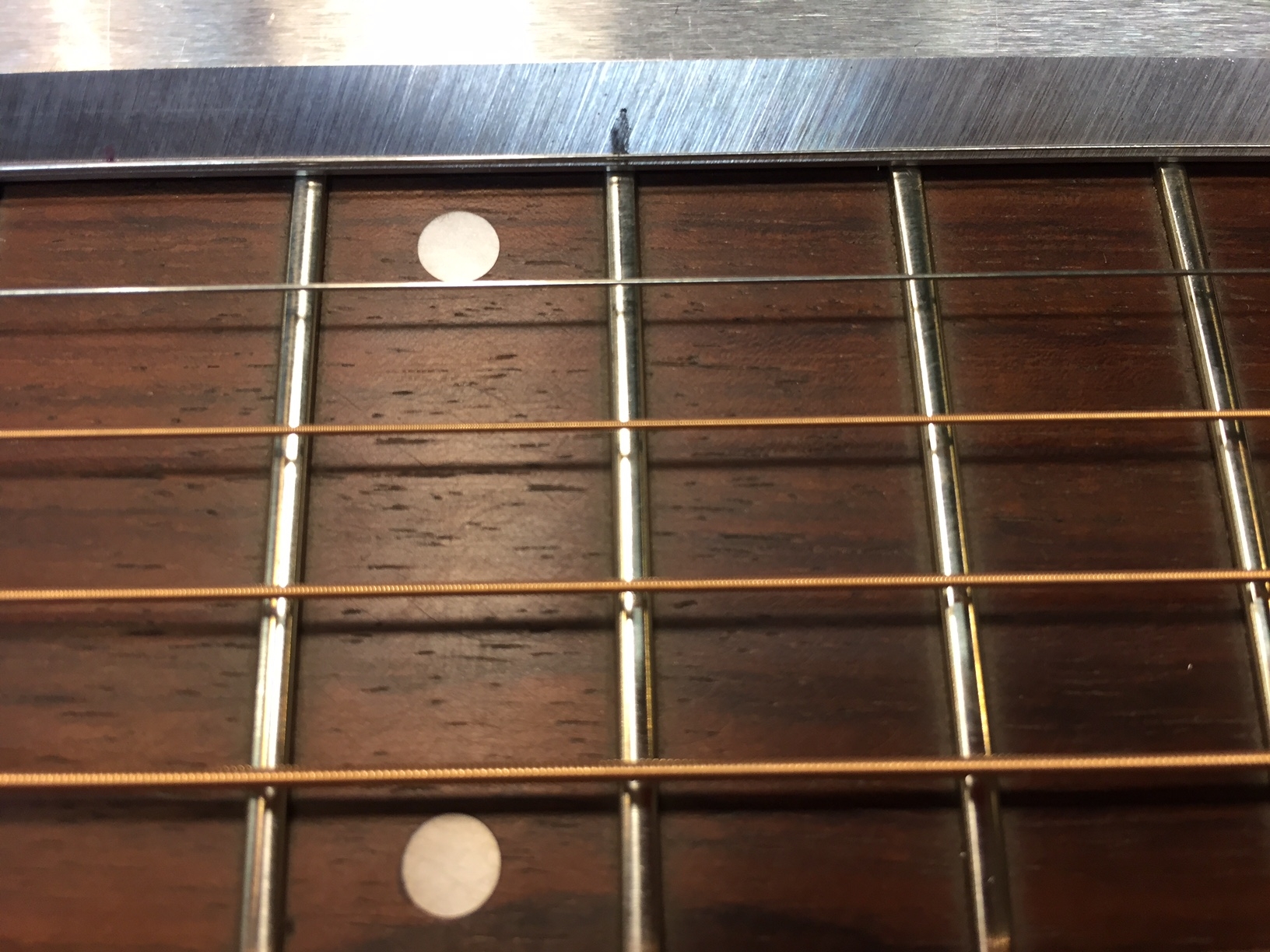 Now I will be re-positioning the ruler to be butted up to the twelfth fret; mimicking the way it had been positioned in the earlier photo, when touching the nut. 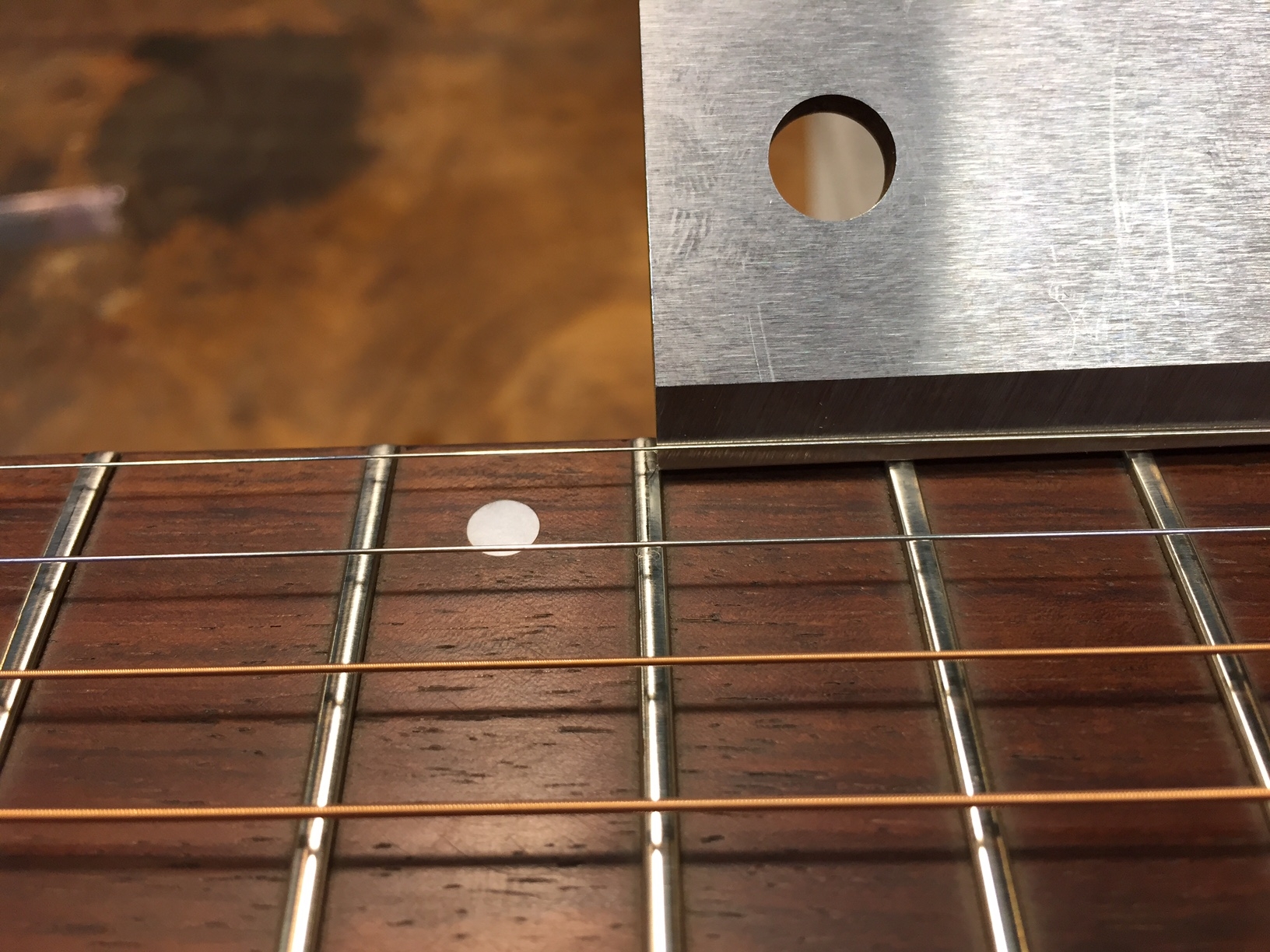 What would be ideal here, would be to see the dash that had been penciled in on the ruler, to now be resting on the saddle in the exact same place as where the high string passes over the saddle. This is the intonation point for this guitars scale length. 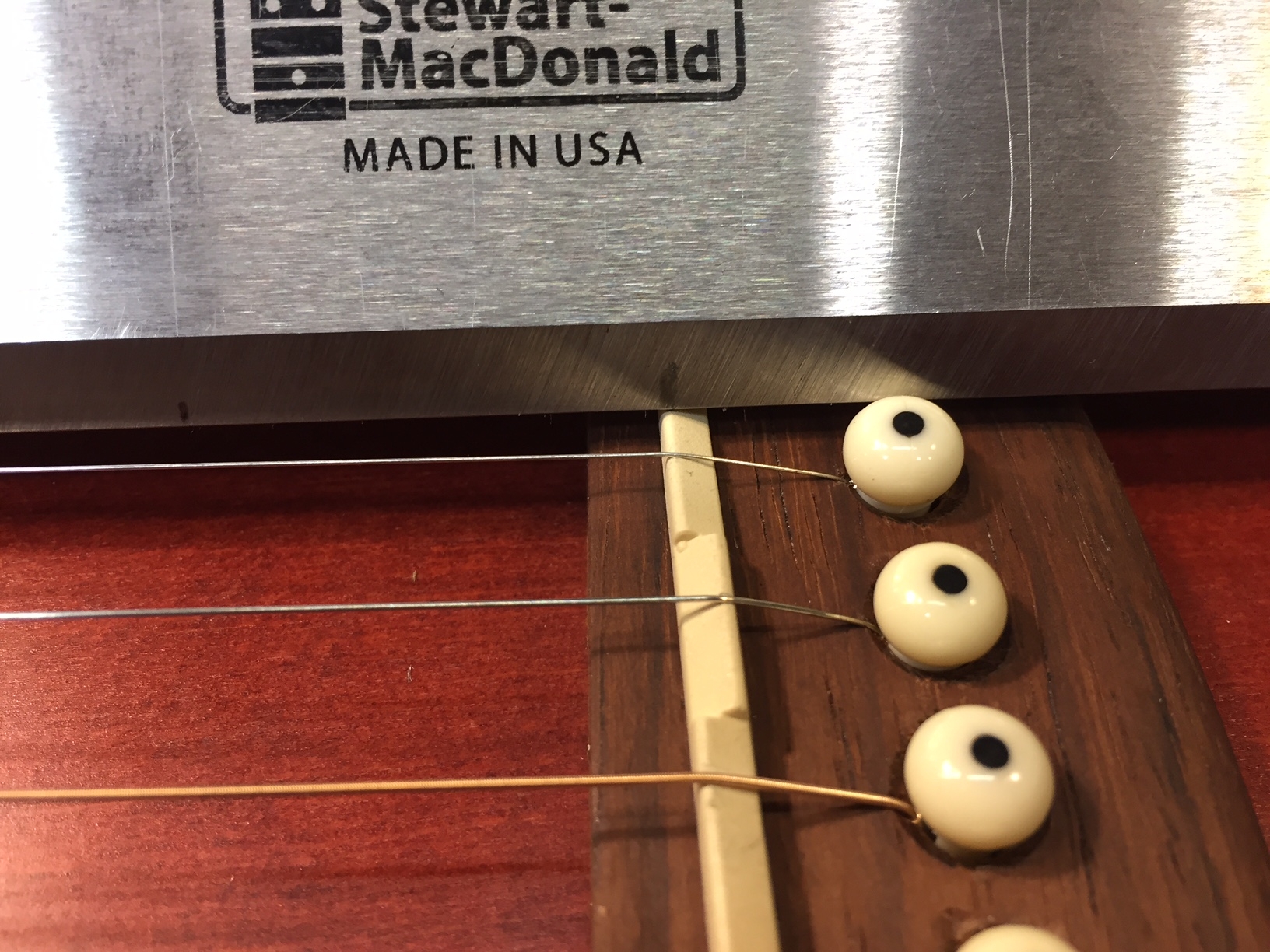 When checking to see if the bass string saddle is in the proper position; simply add 1/8″ to the penciled in dash and there you will have the intonation point for your lowest string. All the other strings will fall between these two marks when intonation is achieved. 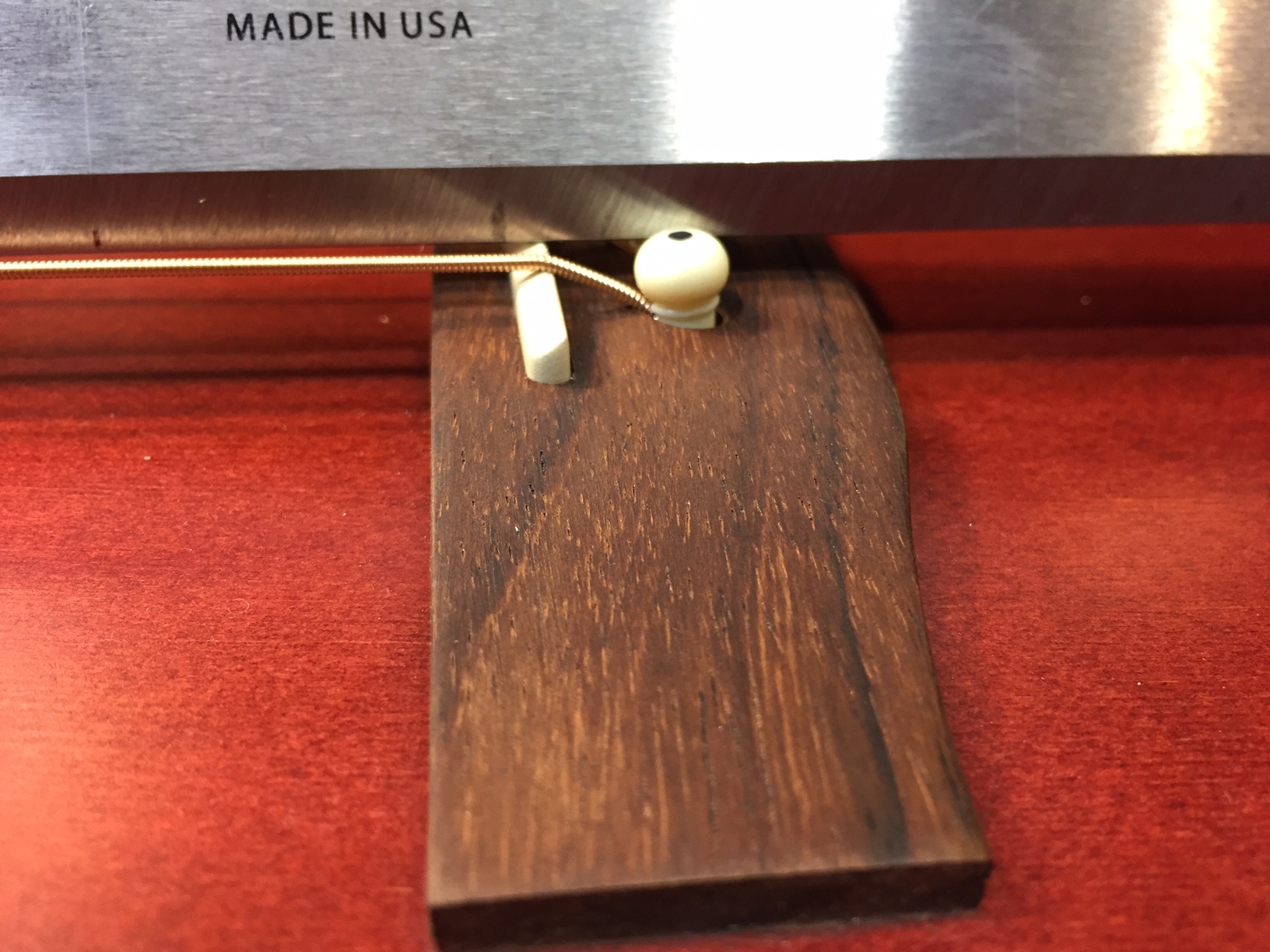 The reason there is so much riding on this step is because regardless the price of said instrument, the materials it was made with, how many hours went into the steps leading up to this step or how beautiful it is; if the string, when tuned open to pitch (between nut and saddle) and is then fretted on the twelfth fret or octave point and the note produced is not a perfect octave above the open note. That instrument will need to have the location of its saddle(s) adjusted. Depending on the bridge type and the room for adjustment of saddle(s), this can be a moderately inexpensive repair. Not all guitars are created equal, some guitars are actually musical instruments and will treat you well for a lifetime and likely longer. While other guitars will only impress your friends, who don’t know any better:(